Collaboration is an important part of every school librarian’s job description. While collaboration can take on many different forms, every form of collaboration has a goal of supporting and enriching learning opportunities for our students. However, collaboration with our teachers does not happen overnight. Spark a collaborative partnership and create a new dynamic duo with a teacher by attending the virtual Teacher Day at this year’s TLA conference!

The TLA Annual Conference will be held virtually for the 2021 year, but will continue to be made up of books, authors, technology integration, makerspaces, curriculum connections, and supportive librarians. This is a teacher’s dream!  Connect with your teachers, encourage their innovation, inspire them to greater collaboration, and impact their instruction by inviting one or two of your teachers to join you at this year’s Teacher Day @ TLA!

Teacher Day @ TLA will take place on Saturday, April 24, 2021 from 10:00 a.m. through 12:00 p.m. This year's Teacher Day will provide classroom teachers with the opportunity to experience a special one-day event during the virtual TLA conference. With pricing designed for the teachers, they will have access to the full virtual conference experience.

This is your chance to inspire your teachers and spark a new dynamic duo collaborative partnership! You, as the sponsoring librarian, will play a crucial role in identifying interested teachers, and helping them secure permission to attend and secure funding. You, the librarian, will also help guide them through the registration process and ensure that our guest teachers have a positive experience.

The planning committee is already at work putting together a fun, interactive, virtual day for the teachers who attend, as well as the sponsoring librarians. Now is the time for librarians to put a plan in place to identify strong candidates among the educators they know to attend and experience the TLA annual conference.

The focus of Teacher Day is to provide an opportunity during the conference for educators to learn about strong school libraries and their potential impact. The goal is for the teachers that experience Teacher Day to return to their districts as library advocates - or perhaps even become librarians themselves.

Details and application information can be found at www.txla.org/teacher-day. This event has become an annual highlight, and you won’t want to miss this opportunity to increase collaboration on your campus. 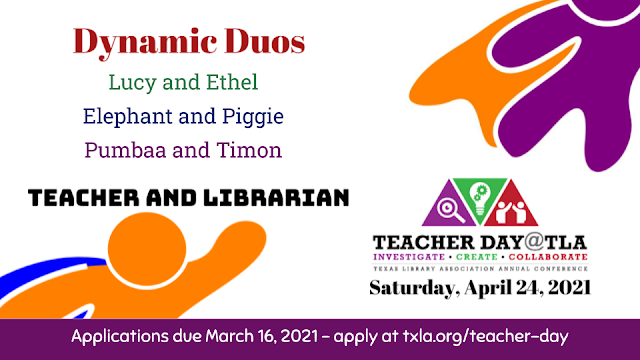 Building Relationships in a Pandemic

Since March 2020, we have all experienced the unimaginable. I am very fortunate to be a bilingual school librarian at an elementary school in Cedar Park, TX. In April, I began to get in contact with my “Library Leaders”, 4th and 5th graders who had helped in the library throughout the school year. Additionally, I created asynchronous virtual lessons for our students. Through the Google Classroom I had created for the library leaders, I offered optional Zoom sessions. As I began to see which students came to the Zoom meetings, I was noticing some of my more involved students during the school year were not showing up.

This led me to question what was going on, and why it might be so difficult to attend live meetings. I was able to speak privately with a few students through the comments in Google Classroom, and I was completely surprised to discover that a fair amount of students attending our school lived in an area with no internet access whatsoever. I had not even realized exactly where these students lived in relation to our campus. From the comments my Library Leaders shared with me, how they were using their parents’ cell phone as a hotspot, how they were getting kicked off Zoom if their sibling tried to sign on at the same time, I knew I had to figure out some way to learn more.

In May, I began to travel out to the homes of the students that I knew first, my Library Leaders. Each of these families had a few younger siblings as well, and I brought along with me new books and a listening ear. One family in particular, I am so thankful for, because the mother, Elva Franco, was able to act as a community organizer in a sense, and give me an idea of how the entire rural neighborhood was doing with virtual learning. 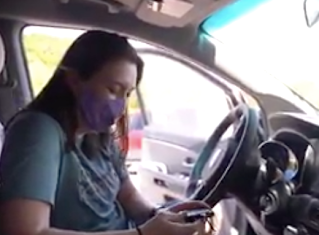 Those last few months of the 2019-2020 school year, were a nightmare. From the educators’ side, it didn’t look that way. We were experiencing a very high rate of participation in virtual learning. It looked as if everything was going decently. But behind the scenes, families were scrambling to afford high internet costs, data for cell phones, and understand messages coming from the school district regarding grades, devices, and requirements for their secondary students.

So that summer I got to work researching internet access in rural areas, possibilities for bringing cables or fiber out, and contacting the Chief Technology Officer (CTO) for our district, as well as the Texas State Representative for the area. I was able to meet with them, as well as a member of our school board, in July, to make sure we had a solution going forward for school starting virtually in August. It was clear that bringing cable internet to this area was a very long-term solution, but hotspots being available for families would be more effective.

The week before school began in August, the hotspots were delayed coming into our district due to a high national demand. Because this was more of an internal discussion among district leaders, the families that I had spoken to were very nervous about starting the school year as a result of lack of information. Elva Franco decided to put together a letter to the school board, and she had it signed by 20+ families, with 40+ students in the district. This got some attention, and kept me in the loop right when hotspots were distributed during the first few weeks of school.

At first, the hotspot requests from these families were being denied, because the area was not on the map for good cell service. Myself and Elva could not accept that. Because I had been in contact with our CTO during the summer, I was able to obtain a hotspot to go out and test it. Honestly, there were a few places in valleys that had spotty service, but the majority of homes did get service through the hotspot. Unfortunately, it took this extra step to get hotspots to these families.

There is no way that families can know all of the ins and outs of a school district. But the key is to be relentless in the pursuit of equitable education for our students. Limiting their access to education is simply unacceptable. Sometimes we, as librarians, are the people who need to take that initiative. We have connections in the entire school, at the district level, and across our communities.

Build on the relationships you already have at your schools. Continue to ask questions and demand the best for our students. More on the story here - https://www.kxan.com/pass-or-fail/what-are-some-of-the-nationwide-solutions-to-help-students-most-in-need-during-the-pandemic/ and here - https://fb.watch/2du7mCZQ_J/

Librarians are among the most creative, innovative educators. And as such, they have thought-out, engineered, and orchestrated innovative programming for the communities they serve. To honor their efforts, the Innovative Programming Award was born. The Innovative Programming Award (sponsored by Demco) recognizes two libraries--one school, and one for all other library types (i.e., public, academic, special)-- that have implemented creative marketing projects and/or promotions to enhance their visibility within their service community.

Perhaps your library has implemented a new website, created new community engagement programs, devised a creative way to showcase genre promotion and topic awareness, or you've created innovative projects to inspire reading and life-long learning. Now is a great time to take the library program you've implemented in recent years and showcase its success. In order to see the implemented program's full potential in action, programming would need to be in effect for at least three years before applying.

The Texas Library Association Innovative Programming Award committee knows there are amazing programs and even more amazing librarians behind them. Winners will receive $1,000 for their libraries. The committee encourages all eligible prospects to apply. Best of luck to all! 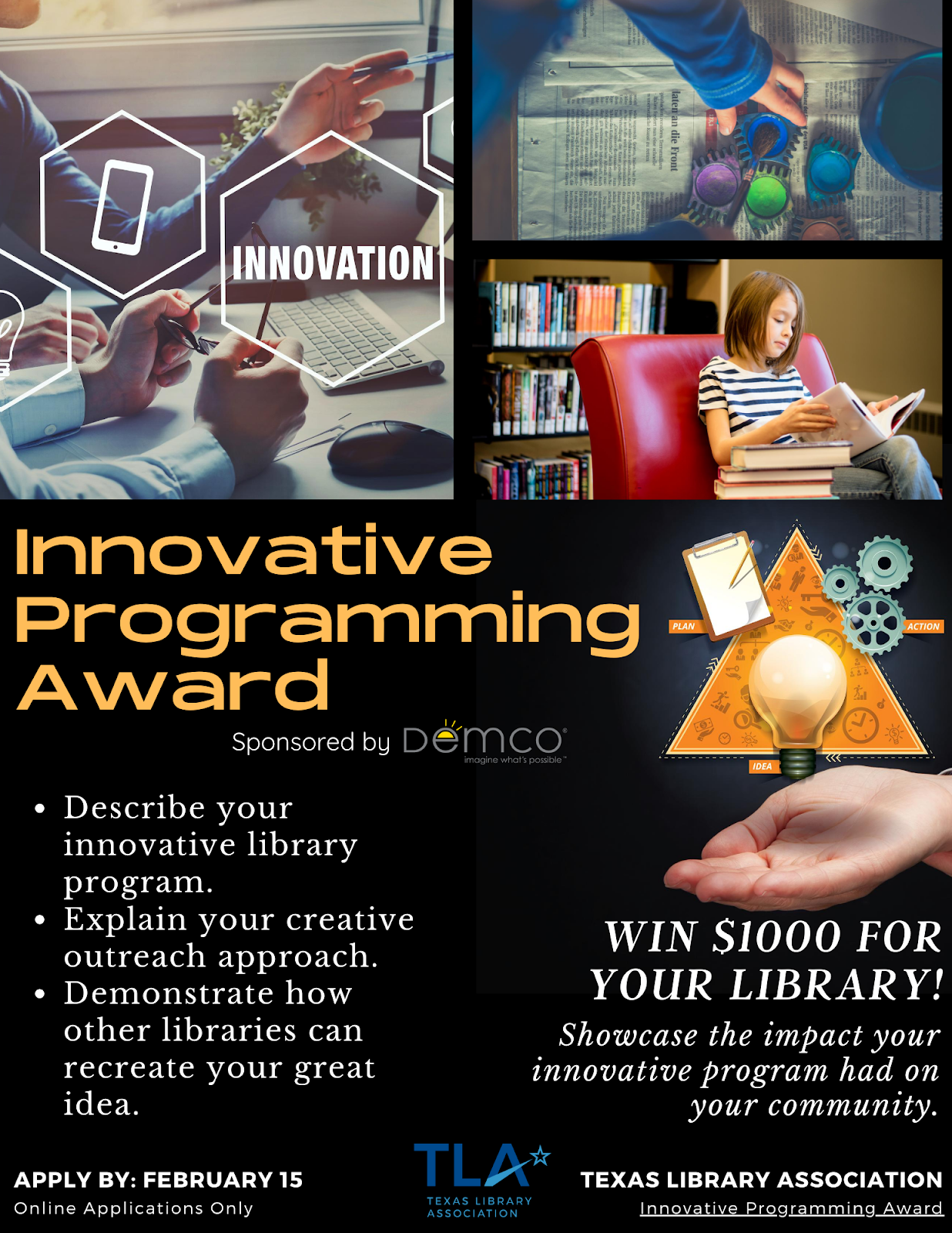